The Diary of a Young Girl, Reviews | Book by Anne Frank

From birth, the Jews had to accept an unjust fate and suffered discrimination, sometimes even being sent to concentration camps with an obsession with death. for one reason: they are Jewish. This happened because of the cruelty of Hitler and the Nazis. They lead the cruel fascism and cause so many Jews to break their families, even their lives are difficult to preserve…

Anne is Jewish. The girl and her family were both victims of war and fascism. Although she hid from Hitler’s group for two years, in the end, Anne’s family and the Jews who escaped with them were arrested and sent to a concentration camp. How much pain, torture, and sometimes having to face death. In the end, only Anne’s father survived, the other seven all died from torture and ill-treatment in the concentration camp.

Anne’s diary records her thoughts during two years living in the secret cellar “Secret Annexe”. In addition, the girl recounted events that she had heard from outside: the situation of the war as well as the news of the miserable Jews who could not have a safe place like this. Anne…

From Sunday, June 14, 1942, the diary began to be recorded. Two days before it was Anne’s birthday, she was given a notebook by her parents to celebrate her 13th birthday and Anne began to write in this notebook.

Anne’s diary is unlike any other. Anne considers this a close friend named Kitty and writes to Kitty whenever she has something to tell others. Every page of Anne’s diary is like telling a story to her best friend. This is what impressed me in this diary, it is not a dry narrative but a story with a close friend about my feelings and thoughts.

It was strange for a little girl like me to keep the habit of journaling. Not only because I’ve never had this habit before, but also because maybe no one cares at all about the little things a 13-year-old kid writes in his diary. Anyway, that doesn’t matter. I want to write, and more than that, I want to record here things from the bottom of my heart.

Around this time, Hitler’s anti-Semitism laws were widespread. The Jews had to hand over their bicycles and they were not allowed to use any means of transport. Jews were not allowed to leave their homes from 8 p.m. to 6 a.m. the next morning, not even to sit in their own gardens. Not only that, they always have to wear a six-pointed gold star, not go to the cinema, or any entertainment place. They are not even allowed to participate in community sports. Jewish children were transferred to a special Jewish school and a host of other taboos.

If you read all the things that Jews can’t do just because they were born Jewish, you will feel truly outraged and unjust. The things Anne told me were so true that I was deeply moved.

The faster the war spread, the more discriminating the lives of the Jews became. Until one day, a summons was sent to Margot – Anne’s sister to go to a re-education camp inside Germany. Anne’s father then decided that both their family and the Van Daan family, who were also in danger, would move to the secret bunker and hide there to overcome the danger.

Anne’s family and Van Daan’s family lived in that secret bunker for two years with the help of four people who were former employees of Anne’s father. Those four kind people provided food, news, books, and study books for Anne, Peter, and Margot during their hiding time.

The cellar where Anne lived was not really a “basement”. They are unused rooms located under the roof of a building on 263 Prinsengracht Street.

I can’t say I feel at home in this cellar, but I can’t say I hate the place either, it feels more like a weird vacation in a weird house. The house was damp and slanted, but in all of the Netherlands, there was no more convenient hiding place than this. Our bedroom has so far been bare, but thanks to my father bringing in the movie newspapers, I was able to cover the walls with beautiful pictures.

Anne’s life in the cellar, although not facing death, was not very happy either. She is always compared to Margot – a beautiful, gentle, and very intelligent sister. In the family, Anne did not like her mother at all.

Anne’s family and Vandaan’s family agree to let Dussel, a dentist, hide in the cellar with them and Dussel in the same room as Anne.

Dussel told everyone about the outside. The war escalated, and now the Nazis were knocking on doors to see if there were any Jews hiding there. Many of their friends have been taken, terrible fates await them. 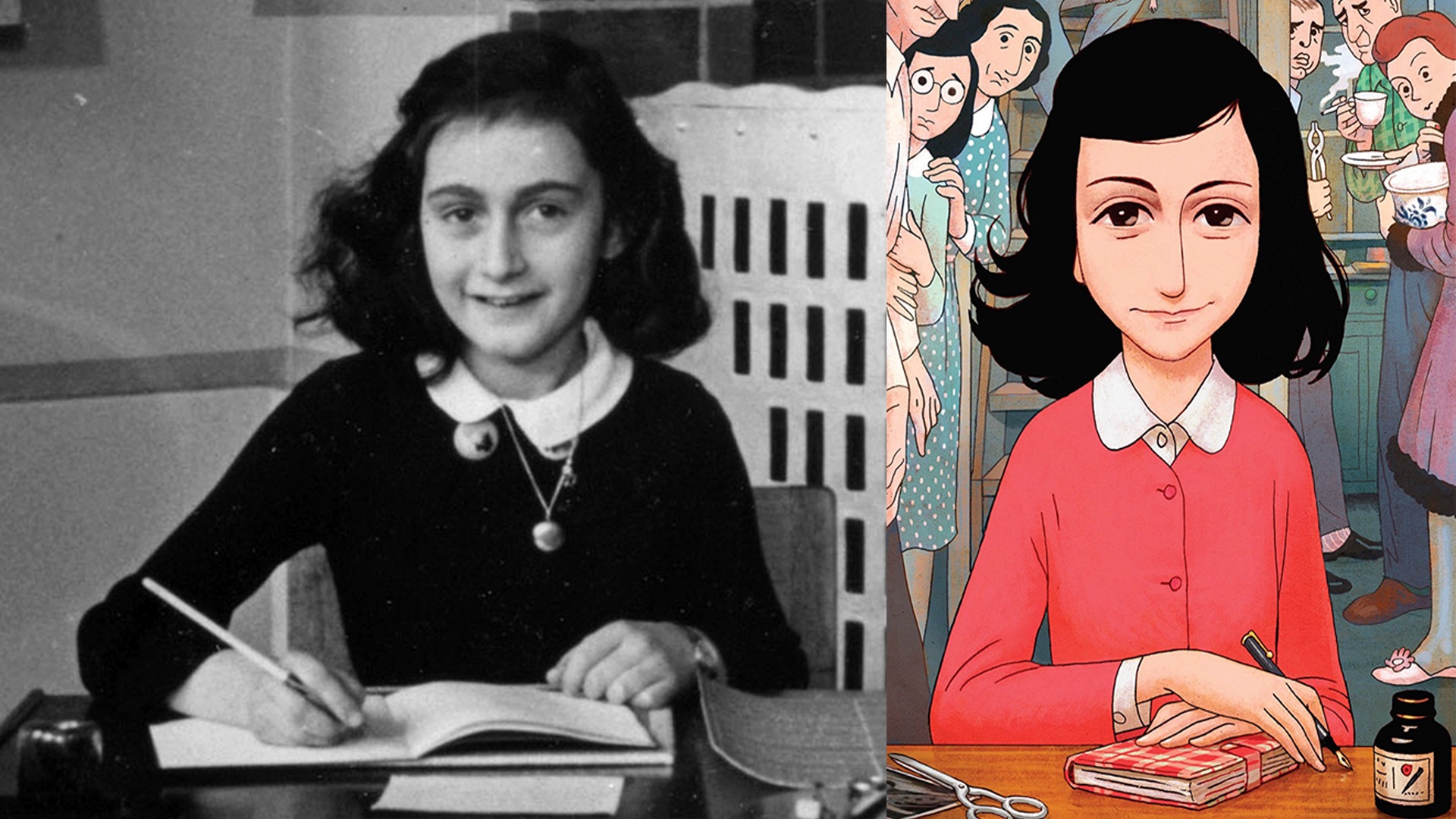 In the dark, I often see long lines of innocent people being led away. They go to death. I felt guilty as I slept in my warm bed and was terrified at the thought of my best friends who were now victims of the fiercest demons on the face of the earth. All are victims because they are Jews”- (Thursday, November 19, 1942)

Anne is a kind little girl. Even though she was living peacefully in her cellar, Anne kept a watchful eye on the fate of her friends – miserable people with nowhere to hide. Even Anne couldn’t sleep peacefully for many nights thinking about it. Therefore, Anne decided not to torment herself anymore, because she said that she would not be able to think about others forever…

The house is sold

The lives of the eight people in the cellar always had to be careful not to be discovered by outsiders. But they also have to have many heart attacks when a carpenter or plumber comes to work and inspects the building.

One day, the house was sold without the knowledge of Miss Miep, who always helped Anne’s family hide. But everything went smoothly because the new owner also did not notice the existence of the secret cellar where the eight of them were hiding.

Anne begins to have thoughts about love. In her diary, Anne expresses strong feelings for Peter and wishes to be Peter’s girlfriend.

I still see our hand in hand on the street… Peter is tall, handsome, slim with a dignified face, calm, and intelligent. He has dark hair, reddish brown cheeks, and a thin nose. What I love most is his smile, which makes him seem sly and mischievous.

Anne and Peter’s love is growing. It was this budding love that made Anne happier and happier during the time she was hiding in this cellar. Peter proved to be a nice and warm guy. They both slowly realize that they have a lot in common and common interests. 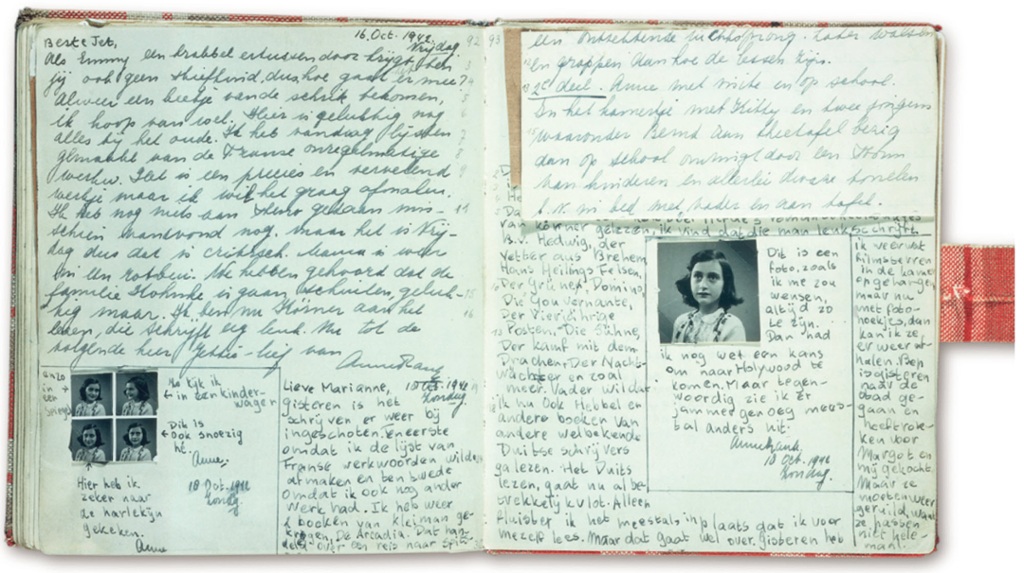 Peter and Anne often talk to each other. He told her about his parents, about himself, and about his past and previous thoughts about her. Gradually, Anne became more open and she decided to tell Peter more so that he could understand her better.

I have a feeling that Peter and I share many secrets. Every time he looks at me with his smiling eyes, I feel like there’s a light in my heart. I wish we would always be like this and that we would have many more wonderful times together like today. – (Sunday, March 19, 1944).

Anne has always wanted to be a writer. The girl loves to read books. All the books that Miep brought, Anne read and pondered carefully.

I want to be a writer. I know that I can write. I want to continue living after death! And this is why I am grateful to God for giving me this gift so that I can express what is inside my soul.

This is what Anne writes in her diary. Anne’s wish to live forever may have really come true because her diary has touched the hearts of readers around the world. After all, Anne and the other Jews could not escape the Jewish fate.

On August 4, 1944, the Gestapo was scouted and entered the cellar to arrest all eight of them. From there, they were sent to concentration camps. Seven people died except Anne’s father. The diary was found in the basement by Miss Miep after eight people were taken away.

Miss Miep did not read the diary but kept it, intending to wait for Anne to return to her. But in the end, Anne was never able to return… Although she could not survive, Anne still left behind a diary of great historical value. The “Diary of Anne Frank” is a book worth reading to better understand the fascist regime and the suffering of the Jews while living under this cruel regime. 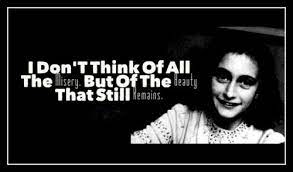 Sadly, a talented, soulful person like Anne Frank had to die at the age of 15. Within two years of being friends with the diary, readers can see the inner maturity in the little girl.

As Anne grew up, many of her thoughts were on women, gender equality, and religious injustice, major issues facing humanity to this day.

Although not much about Hitler’s crimes, Anne Frank’s Diary still really shows us the oppressive attitude of the Jewish people. When dozens of people were crammed into one roof, with no means of communication, every day they heard nothing but being stripped and tortured until all the money in the house died of despair.

What still haunts readers after ending Anne Frank’s Diary is the innocent smile of a young woman. If Anne was still alive, surely the world would have had another talented writer, a living soul, or just a girl full of faith in her life. The war is over, but the rest are still alive. The book is a reminder to everyone to fight for peace so that no child has to suffer like 15-year-old Anne.

“I thought about hiding, so I filled my bag with the most ridiculous things, but I have no regrets. Memories are more important than clothes. ”

“Actually, I don’t really like letting strangers use my stuff, but people have to make sacrifices for a good cause and I’m glad I could contribute a little. My father said, “If we can save even one friend, the rest cannot be compared.”

“I feel guilty when I have a warm blanket, but somewhere, my dear donors are collapsing from exhaustion or falling to the ground.”

“I have never been jealous of Margot. I’m not jealous of her but smarter and more beautiful. I just wanted to feel that my father really loved me, not as a child, but for who I am, Anne. ”

“Crying can comfort me, as long as you don’t cry alone”

“Can you tell me why he tried to swear to hide his true identity? Or why do I always do bad things in front of others? Why do people lack trust? I know there must be a reason, but sometimes I think it’s terrible that we can’t confide in anyone, even those close to us. ”

“My mom’s advice when dealing with grief is, ‘Think of all the suffering in the world and be grateful that you don’t have to be a part of it. And my advice is: “Get outdoors, go to the countryside, enjoy the sun and nature. Go out and try to rekindle your joy; Think of all the good things in you and around you that make you feel happy.

“Beauty remains even in the saddest of circumstances. If we keep trying to find it, we will find more happiness and regain our balance. Happy people will make others happy, courageous and loyal people will not die of suffering.”

TOP 10 most famous writers in the world

Should you read Ithaca by Claire North? |...

Review of Gone With the Wind

Welcome readers to Bookreward.org - A page dedicated to book enthusiasts, connecting and spreading the love of reading to everyone.